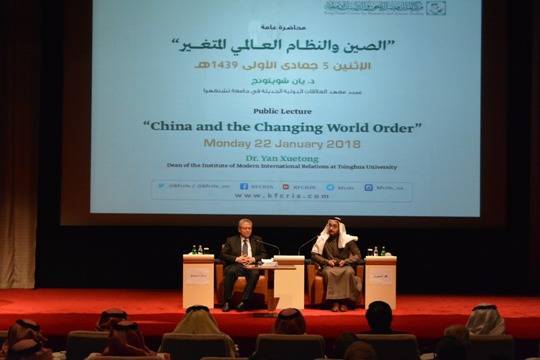 Dr. Yan Xuetong, Dean of the Institute of Modern International Relations at Tsinghua University and Editor-in-Chief of the Chinese Journal of International Politics, gave a lecture on Monday, January 22nd, entitled: "China and the Changing World Order," at the King Faisal Foundation building. This comes within the framework of activities of the "Saudi-Sino Cultural Dialogue" organized by the King Faisal Center for Research and Islamic Studies in January, which includes number of cultural events, lectures and panel discussions attended by a number of officials, academics, researchers, and businessmen from the Kingdom and China.

In the lecture, Yan expressed that the United States is losing its dominant role in the Middle East, but that other powers cannot play the same role. Russia does not have the ability to lead in the region even if it intervenes in Syria and elsewhere. China also lacks the ability to lead or fill.

"The global system has been negatively affected by globalization, which has harmed people," said Yan. "Globalization has positive aspects such as free trade and labor mobility, but there are negative aspects such as terrorism, extremism, polarization and congestion. It has become worse and worse, it cannot be stopped."

Yan pointed out that there is fear of a Cold War between China and the United States because of competition and challenge to American influence and values, indicating that the world system has not changed since the Second World War. He also pointed out that the Cold War between Russia and America created a bipolar system, and with its end, the world became hostage to the unilateral power. He expressed that in the next 10 years, the unilateral hegemony of the United States would end and that there would be a world order led by two great powers, America and China. Currently, emerging powers such as China will be more influential while the US will continue to fall, as the decline of its influence is a reality today. "I do not think that China is planning to confront the United States, and it does not want to take over US influence, but the strength of America is declining," said Xuetong.

Yan pointed out that the regional system in Europe is becoming decentralized, with Britain's exit from the European Union, and Germany and France facing this challenge at the moment, requiring the establishment of new customs on the European continent.

At the end of his lecture, Yan refused to consider East Asia as a danger zone because of the nuclear shield, stressing that it is the safest place around the world. For more than 30 years, there have been no wars in the region. Even the conflict between India and Pakistan has turned into a limited conflict, since they have nuclear weapons, while there were four wars in Europe during this period. He also pointed out that there will be a distribution of power and new customs in the region during the coming period.