Quo vadis, “Party of God”? The Regional Entanglement of the Lebanese Hezbollah
Date: 2016-09-04 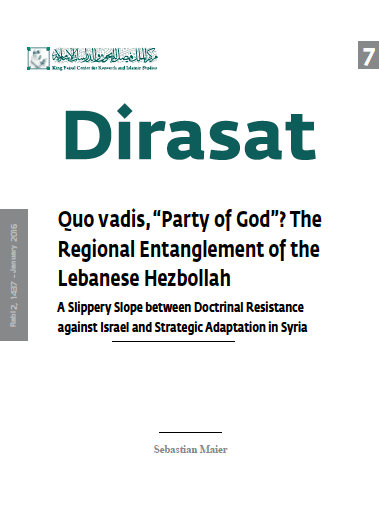 Quo vadis, “Party of God”? The Regional Entanglement of the Lebanese Hezbollah: A Slippery Slope between Doctrinal Resistance against Israel and Strategic Adaptation in Syria. By, Sebastian Maier.

In this 7th version of Dirasat, Sebastian Maier argues:

While the Lebanese Hezbollah’s raison d’être ever since its inception in the early ’80s has been the mantra of unwavering resistance against the Israeli occupation of Lebanese soil, in April 2013 the Shi’ite militia’s secretary general, Hassan Nasrallah, publicly stated that his fighters were openly fighting alongside the Shi’ite-sect Alawite regime of Bashar al-Assad on Syrian ground. Since then, Hezbollah has steadily deepened its commitment there both in size and in scope. It has scored tactical victories and territorial gains on the Syrian battlefield in bolstering the foothold of al-Assad, just as it has suffered considerable losses among some of its most experienced military ranks.

Therefore, Hezbollah’s deepening interference on Syrian turf testifies to a paradigm shift in its strategic realignment in the context of the Levant’s unprecedented volatility. Feeling the repercussions from internal political divisions in Lebanon and the increasingly intricate frontlines across the neighboring country of Syria, Hezbollah has embarked on a dangerous path that is likely to yield grave consequences in the not-too-distant future. As it carries the dual burden of being expected to maintain the opposition against Israel as well as shoring up regime loyalists in Syria alongside Russia, it risks stalemate on its southern front and overexpansion in the protracted Syrian quagmire.

Whether Israel, currently sitting relatively tight, will eventually unleash draconian military action on the militia given a presumably weakened Hezbollah or whether the latter might eventually surface as a tangible actor in a future partitioned Syria remains to be seen. Both are plausible possibilities that will determine the future of the military wing, political party, and welfare provider that make up Hezbollah. To that end, this paper aims to dissect the current complexity of the inherent duality of Hezbollah’s position it faces in stemming the tide on both its southern and the eastern front in light of its broader strategic realignment in the Syrian theater