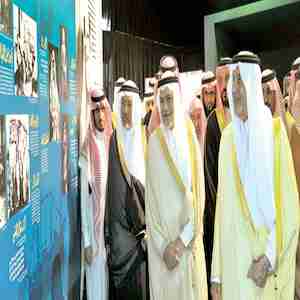 The Al-Faisal exhibit commenced its tour around different parts of the Kingdom, arriving to Jeddah. The Jeddah exhibit was inaugurated by Prince Khaled Al-Faisal and Chairman of the King Faisal Center for Research and Islamic Studies Prince Truki Al-Faisal. The exibit was designed to show the life and contributions of the late King Faisal bin Abdulaziz. It is a chronological exhibit with different sections focusing on his childhood and upbringing, his role as viceroy for King Abdulaziz in the Hijaz, his reign, and his martyrdom. It sheds light on the issues that were most important to him such as the development of the Kingdom Saudi Arabia and its people, unity in the Arab and Islamic worlds, and ending the occupation of Palestine. Some of his personal effects and interests are also included. The exhibition has travelled extensively within the Kingdom, visiting most of the regions and informing visitors of the pivotal and important historical period in Saudi and world history that was the life of King Faisal bin Abdulaziz.