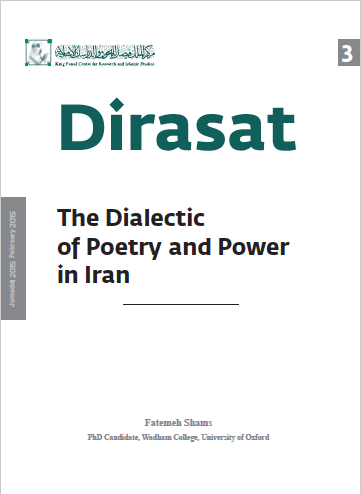 :Abstract
The present study tackles the question of the relationship between poetry and power in Iran in three periods, with a specific focus on the third one. The first period stretches from the rise of Persian court poetry in the medieval period to its demise in the wake of the constitutional movement (1905–11). The second reaches from the rise of constitutional and modern poetry to the emergence of pro-revolutionary poetry at the outset of the 1979 revolution. The third features the emergence of state-sponsored poetry in post-revolution Iran, which has reached its climax since the inauguration of poetry nights attended by the current leader of the Islamic Republic in 2000. Through these three episodes, and bringing the poetic precedents of each period into discussion, I argue that the emergence of state-sponsored poetry during the post-revolutionary period has to be understood and analyzed in light of its poetic precedents and the ongoing dialogue of poetry and power in Iran.