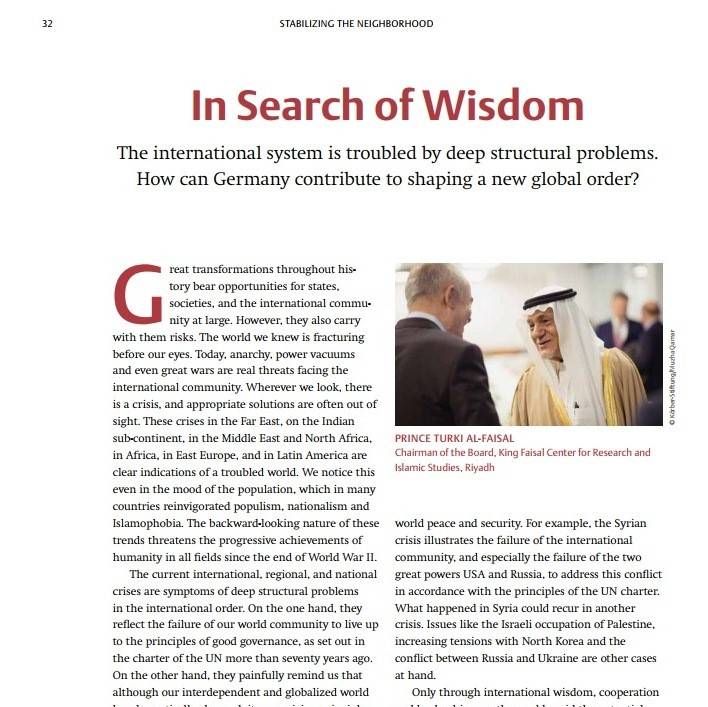 The annual report "The Berlin Pulse" contains an article by Prince Turki Alfaisal, Chairman of the King Faisal Center for Research and Islamic Studies, titled "The Search for Wisdom: The International System Has Deep Structural Problems." A number of politicians and academics from Germany and around the world participated in the report.

The annual report, published by the German research firm Körber at the Berlin Foreign Policy Forum, entitled "The Scene of German Foreign Policy" and the discussion of different views and views on German foreign policy, was co-authored by a number of high-level international writers. It provides an explanation of what should be the responsibility of Germany at the international level.

Prince Turki Alfaisal, in his article published in the report, focused on the international crises and the real threats facing the international community. The progressive achievements of mankind in all fields are threatened, pointing out that they are symptomatic of deep structural problems in the international system and reflect the failure of our global society to rise to the principles of good governance.

Alfaisal stressed the need to restructure the international system in the future in order to achieve a more equitable and comprehensive vision of international reality. Otherwise, geopolitical turmoil would continue to threaten world peace and security; it was an outdated structure that was unable to meet the challenges of today.

The reform of the existing system requires new thinking by all United Nations Member States, including the five permanent members of the Security Council. And that a sustainable international order that preserves peace and security in the world must be a fair system to meet the pressing challenges and threats facing humankind.