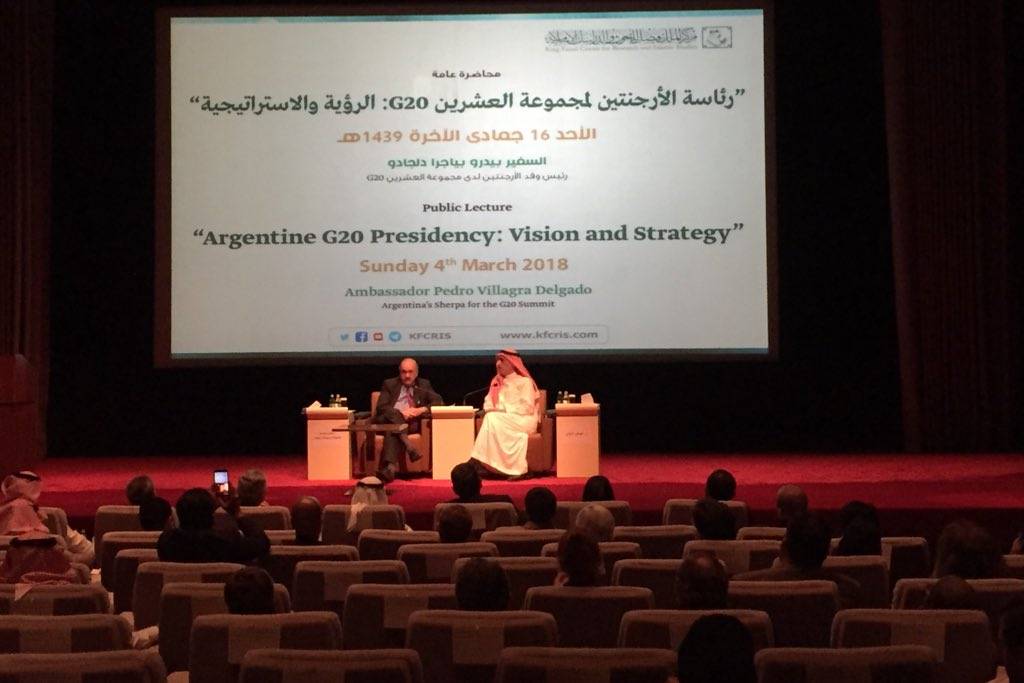 The King Faisal Center for Research and Islamic Studies organized a lecture entitled: "Argentine G20 Presidency: Vision and Strategy," presented by Ambassador Pedro Villagra Delgado, Representative of the Delegation of Argentina to the G20, on Sunday, March 4th 2018. A number of economic officials, academics and diplomats were in attendance.

At the beginning of the lecture, Ambassador Delgado explained that the G20 is not an executive organization; it is a mechanism of action and understanding among member states to provide global stability in the economic and financial sense. He noted that the group was not planning to expand and include more members; because there were larger and more capable international organizations in the formulation and implementation of global decisions, such as the World Trade Organization or specialized organizations, programs and funds of the United Nations. But it is a good place to discuss important international issues.

On the term of the Argentine presidency of the group, Ambassador Delgado said: "The mission of the group is to bridge the gap and build consensus among the members. Argentina does not have all the decisions within the group." During its presidency, Argentina plans to work more closely with international organizations, in addition to inviting a number of other countries to attend the Buenos Aires Summit and to participate in meetings and discussions.

Delgado added that the focus is on people, by maintaining sustainable development and inclusive growth, and said that Argentina has set priorities for the chairmanship of the group, among which is education, job creation, training and rehabilitation of people to adapt to the technology that has begun to replace the work of human beings. He stressed the importance of investment in infrastructure, as well as food security, and the empowerment of working women.

He also stressed the need to continue these priorities, because they cannot be achieved during Argentina's specific presidency this year. There is a need for meetings and long-term work in the coming years.

The G20 summit will be held in late November 2018, the group's 13th meeting, in Buenos Aires, which will be the first G20 summit to be hosted by the South American continent.

Saudi Arabia will preside over the G20 in 2020 and host the G20 summit in the same year. The choice of Saudi Arabia is welcomed by the G20 countries and is a strong vote by the world's leading nations for confidence in the Kingdom and its place among the world's top 20 economies.

The G20 is an international summit bringing together heads of state, government, finance ministers and central bank governors from 19 industrialized and developed countries as well as the European Union to discuss policy, economy, finance and trade issues to achieve sustainable development goals and promote international financial stability.

It is worth mentioning that this lecture comes within the periodic program of the King Faisal Center, which consists of organizing seminars, lectures and workshops, by hosting experts and specialists to discuss all contemporary intellectual, social, political and economic issues.