Lecture: Transformational Leadership of Mahatma Gandhi - Its Importance in the Contemporary World 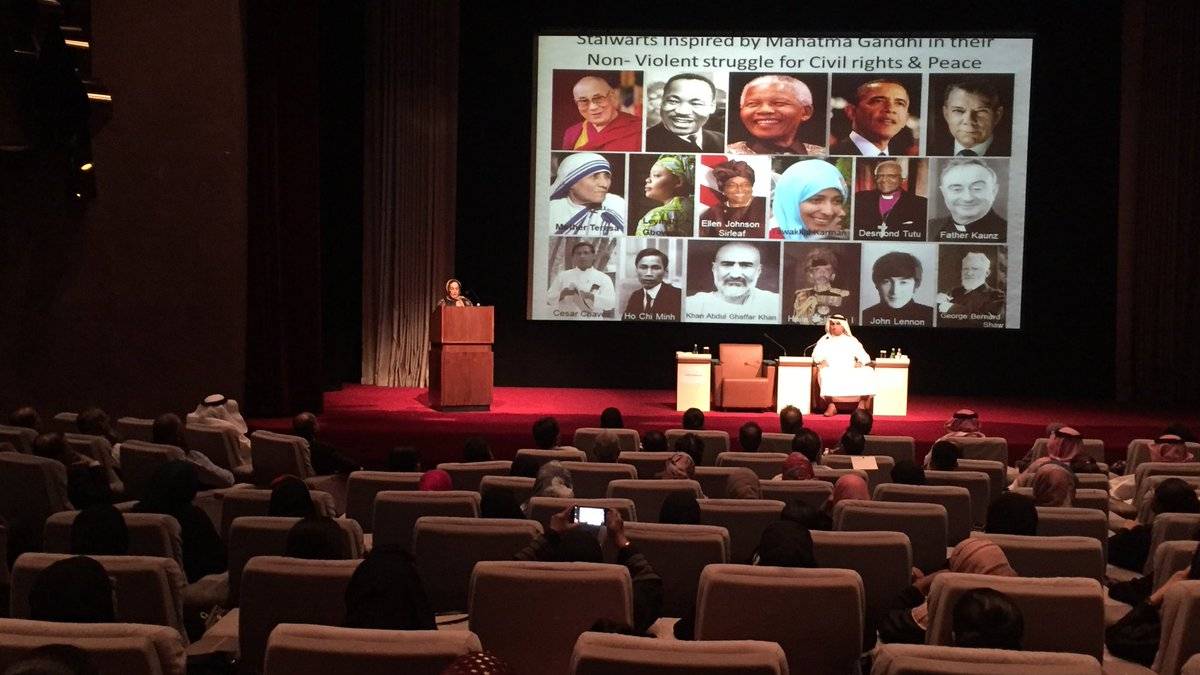 An Indian activist stressed the need, now more than ever, to pay attention to the ideology of Mahatma Gandhi in the contemporary world in order to contribute to the end of conflict and violence in many regions of the world.

This came during a lecture given by Shobhana Radhakrishna, President of the Gandhi Forum for Ethical Corporate Governance in India, at the King Faisal Center for Research and Islamic Studies on Wednesday, September 26th, entitled "Transformational Leadership of Mahatma Gandhi: Its Importance in the Contemporary World," which was in the presence of Indian Ambassador to the Kingdom Ahmad Javed, as well as a number of academics and members of the public. The lecture was moderated by Professor of International Relations at Naif Arab University for Security Sciences, Yahya Al-Zahrani.

Radhakrishna said Gandhi devoted his life to finding solutions to end the conflict, dividing and ending colonialist violence, and focusing on practical solutions. She also explained how he showed respect for all religions and was influenced by the Koran and the Prophet (peace be upon him), believing that Islam is a religion of peace, as well as having many friendships with Muslims and Islamic figures.

Radhakrishna noted that Gandhi's contributions included environment, economics and education, and not just politics. In his belief in serving humanity, human equality, and fighting ignorance and racism, he stressed the importance of education to overcome them and to promote peoples. He believed in the importance of preserving and developing the environment and encouraging people to respect it. He had a great environmental role by personally using the least amount of resources available, as well as his interest in recycling.

Radhakrishna said: "The world today faces many challenges with scientific and technical progress, and witnesses economic collapses and problems in increasing rates of migration and violence. Today, more than ever, we need this thought to confront the violence and globalization that perpetuates conflict and racism. And to build a world that adopts a policy of non-violence and the constant pursuit of peaceful solutions."

Shobhana Radhakrishna is the President of the "Gandhi Forum for Ethical Corporate Governance" organized by SCOPE to promote ethical business practices and organizational integrity in the public sector institutions of the Government of India. She has traveled to several countries and has more than 35 years of social work experience in development projects in different parts of India. Through her experience in Gandhi's constructive work in social development and welfare and the welfare of poor communities, she sought to devote her life to the cause of serving the poor in achieving equality, self-reliance and achieving peace, justice, and dignity.