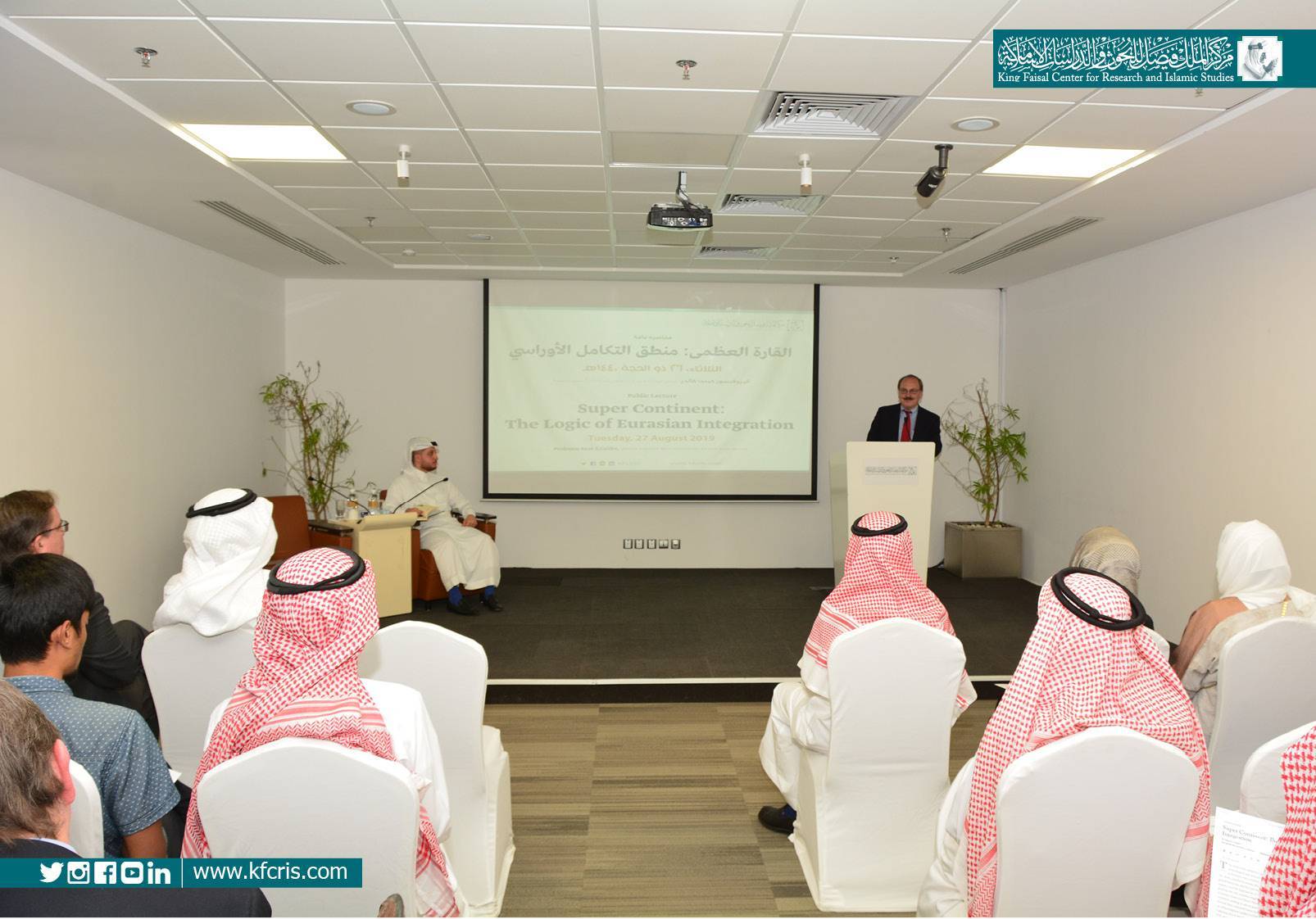 King Faisal Center for Research and Islamic Studies held a public lecture entitled: “Super Continent: The Logic of Eurasian Integration”, presented by Professor Kent Calder, President of the Edwin or Rishauer Center for Oriental Asian Studies, on Tuesday evening 27 August 2019, in the presence of the Secretary General of the Center Dr.. Dr. Saud Al-Sarhan, a number of diplomats, academics and interested members of the public.

At the beginning of his lecture, Professor Kent Calder focused on the importance of geography and its role in this integration, in terms of natural resources and resources, the development of transportation and communications systems, as well as border and trade issues. He stressed the absence of distance between states and the need to understand geography in the context of new contexts of Eurasian geopolitical transformations. Calder made several points about the logic of integration on land in Europe and Asia, including a shorter land route between China and Europe, and spoke of the instability of India's border countries and China's material centrality.

In his lecture, Calder also touched on the future of Northeast Asia and the growing Chinese influence, so that China has become a vital strategic player in the logic of Eurasian integration, due to its financial and economic renaissance, and its important and increasing role in many areas, including maritime transport and transport, even e-commerce.

Calder adds that there is a shift in Euro-Asian relations, which comes from China through its central geopolitical position, as its domestic and international policies prepare to change world affairs. He said the Belt and Road Initiative has drawn attention to a deep Eurasian interdependence.

The president of the Edwin O'Richauer Center for Oriental Asian Studies gave a theoretical explanation based on these changes, from the collapse of the Soviet Union to China's response to the global financial crisis. He said China's emerging regional and global roles involve understanding two ongoing transformations within China and across Eurasia. The two are deeply interconnected. Calder stresses that the geo-economic logic that dominated Eurasia several centuries ago, and made the Silk Road a central route for world affairs for nearly two thousand years;

Calder concluded by stressing the importance of the element of resources and natural resources in this area, and therefore expects a major and rapid development in the deep relations between the continents, especially in the field of energy and technology, and said: The opportunity is very great to deepen relations and integration between countries, especially in the economic field; To contain many economic and political problems, the most important of which is the phenomenon of terrorism. The lecturer also recommended cooperation with countries such as India, Japan and China to some extent to promote pluralism, deepen the logic of integration and distribute the benefits of integration on a larger scale among countries to reach the so-called “globalization of distribution”.

The full lecture can be viewed through the King Faisal Center's YouTube channel (kfcris) and the latest lectures held by the Center in previous seasons.