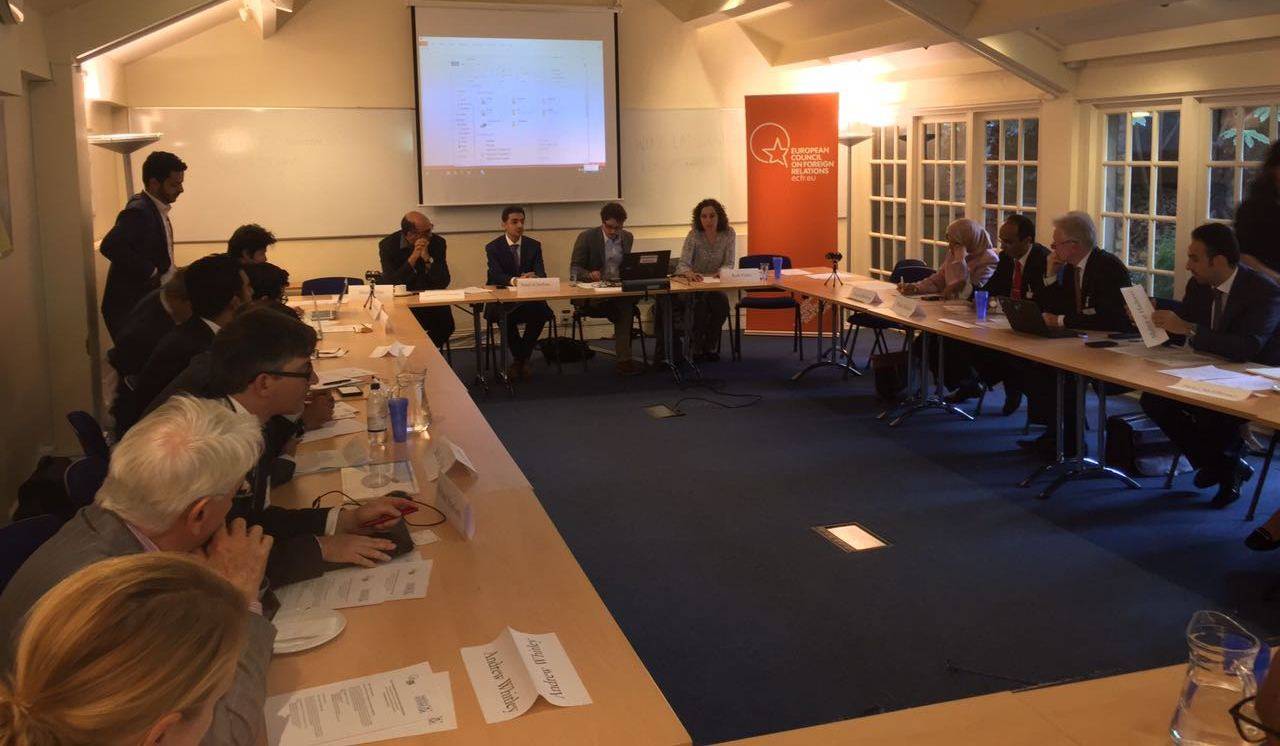 The King Faisal Center for Research and Islamic Studies (KFCRIS) and the European Council on Foreign Relations co-hosted a workship in London entitled "The Humanitarian and Political Crisis in Yemen: Formulation of a European Response."

The first session was devoted to discussing the humanitarian crisis in Yemen. Lawyer Saleh Al-Noud presented a report prepared by the Madar Center at the University of Aden, in which he documented thousands of violations by the Huthi militias against civilians in Aden until 2015. Baraa Shaiban also spoke about the violations in Taiz and the siege imposed on civilians by Saleh and the coup. The representative of Oxfam spoke about the difficulties faced by relief organizations in delivering aid to civilians. Mr. Maher Al Hadhrawi, Assistant General Supervisor of the King Salman Center for Relief, spoke about the Center's efforts in helping Yemenis, especially in the eradication of cholera and delivering humanitarian aid to the needy in Yemen.

The second session focused on the economic crisis in Yemen, in which Khalid Al-Abadi of the Central Bank of Yemen talked about the difficulties facing the bank in its work and the great efforts exerted by the bank's staff in Aden to restart the bank fully. He also called on the international community to pressure the coupists in Sana'a not to use the resources of the state in financing their wars, as well as the former Yemeni Minister of Youth and Sports Raafat Akhali.

The third session of the panel went to discuss "Paving the way for a post-war settlement - Means for constructive development and reducing the risk of conflict." The meeting discussed Yemen's entry into cross-conflict, what international and regional actors and international NGOs can do to reduce conflict and resolve the crisis, in addition to the European and regional role in cooperation with Yemeni right-wing organizations in reducing tension and improving the role of government and providing services to create a secure internal environment.

The meeting also confirmed Yemeni participants from different perspectives on the need not to flatten the issue and deal with it only as an extension of sectarian conflicts. They called for understanding the regional and tribal complexities, intersections, and the history of previous conflicts and to absorb the dimensions of current conflicts so that they can be based on solutions that are compatible with understanding the problem. The southern activist Jihad Abbas stressed that any solution to the Yemeni crisis must include Saudi Arabia as a guarantor and reliable from all the Yemeni parties, and that there is no solution without Saudi Arabia.

The panel was attended by high-level representatives from the European Council on Foreign Relations, the British Foreign Office, the King Faisal Center for Research and Islamic Studies, a number of European diplomats, and representatives of Arab and British consulting firms, businessmen and media.