Libya on the Brink and How to Pull it Back: Options for International Actors
Date: 2016-09-04 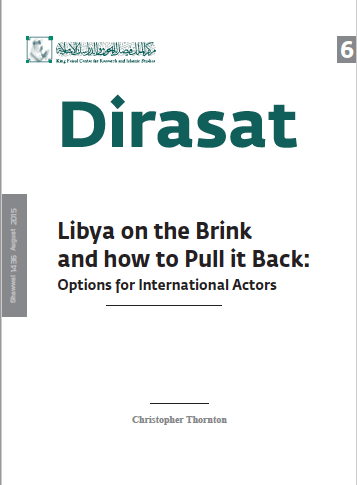 Libya on the Brink and How to Pull it Back: Options for International Actors

The launch of Operation Dignity in May 2014 transformed Libya’s low-level military and political conflict into a full-blown war. The seizure of Tripoli and much of western Libya by the opposing Libya Dawn movement left the country divided in two with two parliaments, two governments, and two putative armies. The violence of the last year has left the country on the brink of economic, social, and political meltdown, and provided an opportunity for the organization known as Islamic State (IS) to proliferate. If Libya goes over the edge, this will have major consequences for Europe and the region: Libya will become a base for launching terrorist operations for the foreseeable future and the scale of illegal migration and other forms of smuggling will reach previously unimaginable proportions. The international community’s efforts to resolve the crisis, particularly those of the United Nations Support Mission in Libya (UNSMIL), have failed to prevent this collapse. UNSMIL’s initial approach to solving the division of Libya’s elected parliament, the House of Representatives (HoR), did not engage key decision makers and bred mistrust on the part of the Libya Dawn camp. Consecutive drafts of a political agreement failed to reconcile the fundamental interests of each side and met with opposition from one side or another. Armed actors on both sides were not sufficiently engaged and are not invested in the solution currently on the table. The decision to close the draft agreement to further amendments and initial the agreement in Skhirat, Morocco, on 11 July, 2015, without the support of major components from the Libya Dawn camp was a risky strategy which has very limited chances for success. If this strategy fails and the agreement cannot produce an inclusive Government of National Accord, then the international community will have no choice but to pursue a more long-term and multidimensional strategy. This strategy would not eschew the possibility of a high-level political agreement, but would attempt to facilitate it.