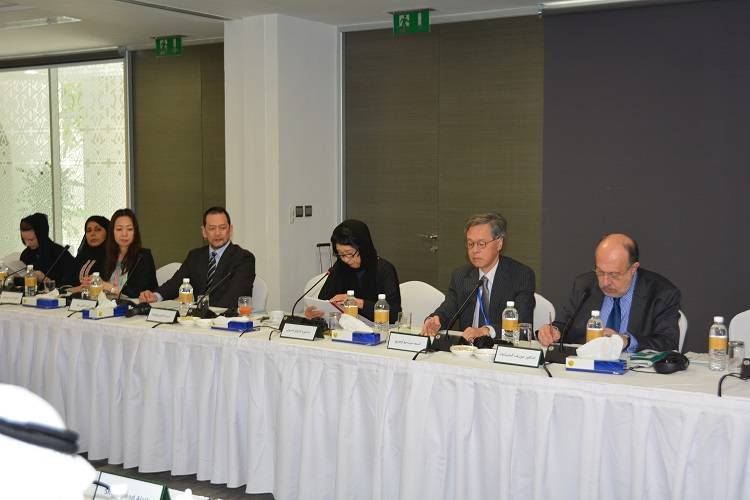 KFCRIS, in collaboration with the Sasakawa Middle East Islam Fund, hosted a workshop entitled “Saudi–Japanese Scholars Dialogue towards 2030” on Monday May 15th 2017 at the Alfaisal Institute for Human Resources Development.

The workshop focused on several key issues, including the history of Saudi–Japanese relationship and its increasingly multifaceted nature, its current development in relation to the Saudi Vision 2030 initiatives, and the changing status of Saudi and Japanese women in their respective society in the past decades.

The workshop was concluded with proposals for greater bilateral cooperation in the coming years, such as the need to facilitate social – as well as economic – exchanges and promote mutual understandings through wider and deeper human networks and dialogues, which are desirably supported by private sector actors.

The workshop was moderated by Dr. Saud Alsarhan, the Secretary-General of the KFCRIS. Following the opening remarks by Dr. Alsarhan and Dr. Kayoko Tatsumi, the Director of the Sasakawa Middle East Islam Fund, the keynote speeches were delivered by H.E. Mr Setsuo Ohmori, the Chargé d’Affaires of the Embassy of Japan in the Kingdom of Saudi Arabia, and Dr. Thoraya Obaid, a former member of the Shoura Council and the former Executive Director of the UN Population Fund.

The workshop consisted of two sessions: Session 1 “Regional and International Politics and Saudi–Japanese Relations”; and Session 2 “Empowerment of Women in Saudi Arabia”. The Session 1, chaired by Dr. Joseph Kéchichian, a Senior Research Fellow of the KFCRIS, had two speakers: Mr. Saud Kabli from the Saudi Ministry of Foreign Affairs; and Mr. Koji Muto from the Japan Cooperation Center for the Middle East. The Session 2, chaired by Dr. Fahad Al-Sharif, a Senior Research Fellow of the KFCRIS, also had two speakers: Dr. Hoda Al-Helaissi, a member of the Shoura Council; and Dr. Namie Tsujigami from the University of Tokyo.