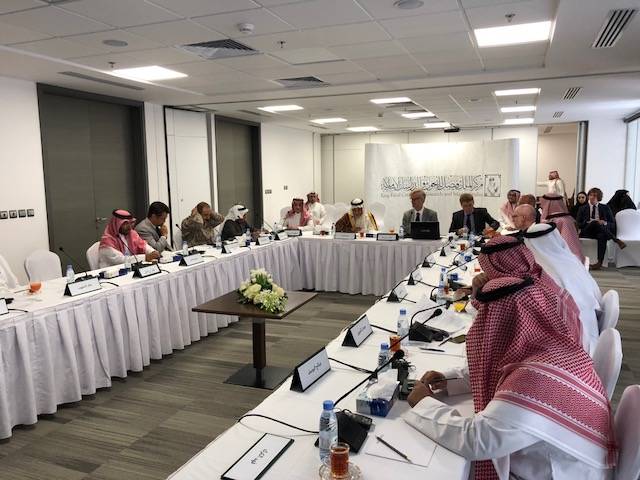 The King Faisal Center for Research and Islamic Studies held a seminar entitled: "Middle East Security and Possible Pathways to Peaceful Resolutions" on Sunday, October 8th, 2017, in the presence of the Chairman of the Board, Prince Turki Alfaisal, and a number of ambassadors, officials and experts in the field of political and security affairs.

Dan Smith, Director of the Stockholm International Peace Research Institute (Sipri), stressed the need to build peaceful relations among the countries of the region by focusing on the capabilities of each country, investing properly, and addressing the social and dynamic challenges faced by these countries. The emergence of new important issues in security and conflict in the Middle East, notably the Syrian issue and the millions of Syrian refugees abroad.

Smith warned that global security is more vulnerable and chaotic, pointing to the emergence of multiple power centers around the world than the political polarization of the Cold War.

Peter Wezeman, a researcher in the weapons and military spending program at the Stockholm International Peace Research Institute, gave a clearer account of the volume and statistics of arms and military spending in the countries of the world, particularly the Middle East, North Africa and Iran, pointing to an increase in military spending by 50% during the period Between 2006 and 2015, noting the need to identify the motives behind these figures.

During the panel discussion, an open debate took place between the participants and the keynote speaker on the various security and political issues in the Middle East. The spokesman warned the president of minimizing Iran's nuclear ambitions and its relentless uranium enrichment efforts, posing a threat to the security of the Middle East, and that the nuclear agreement concluded by the world powers with Iran will not contribute to the maintenance of the Treaty on the Non-Proliferation of Nuclear Weapons both in the region and at the global level.