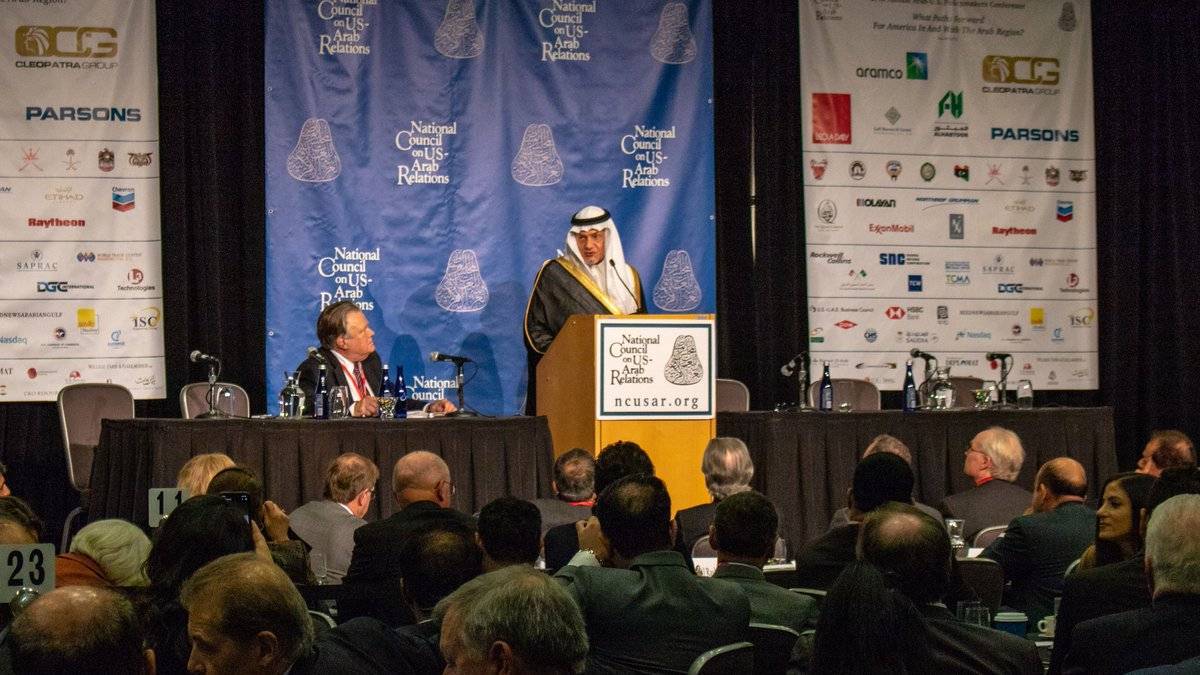 His Royal Highness Prince Turki Alfaisal gave a Keynote speech at the 27th Annual Arab-U.S. Policymakers Conference on the 31st of October, 2018, What Paths Forward For America In And With The Arab Region? organized by the National Council on U.S.-Arab Relations.

We say in Arabic “ما أشبه اليوم بالأمس”, meaning how often today resembles yesterday. In the age of strategic confusion, populism, and polarization, to talk about the Saudi-US relationship is a challenge. For more than seventy years, Saudi Arabia and the United States have engaged in a “special relationship”, an alliance that served the national interests, throughout those seventy years, both countries. This important relationship, though never without strains, survived and flourished under thirteen US Presidents and six Saudi Kings. They recognized the mutual benefits for both countries’ interests. The relationship was always thicker than water, to coin a phrase.

The crises of the oil embargo of 1973 and the tragic day of 9\11 changed the factors impacting the reciprocal benefits of the relationship. However, despite the intense media onslaught on the Kingdom by instant experts, politicians, think tanks, and pundits, the relationship recovered and even broadened,

Nowadays, this relationship once again strained. The tragic and unjustified crime that took place in the Saudi Consulate in Istanbul that took the life of Jamal Khashoggi, God bless his soul, is the theme of today’s onslaught and demonization of Saudi Arabia in the same fashion as the previous crises. The intensity and gleefulness of it is equally unfair and malicious. Subjecting the future of our relationship to this issue is not healthy, at all.

Saudi Arabia is committed to bring to justice those responsible for Jamal Khashoggi’s murder and whoever else failed in upholding the law. Justice will run its course.

From this podium, I have said many times that our relationship is too big to fail. I believe that it will survive this crisis. Reasoning together and sifting facts from fiction is imperative. It is not a choice. To avoid drifting towards alienation and suspicion, we must work genuinely to preserve our mutual trust. When talking about this relationship, Ladies and Gentlemen, I am not only talking about the plethora of bilateral aspects, diplomacy, oil, trade, arms, investments, finance, education, training, and people to people. I am talking about the long years of our two countries working together on issues of world peace, Middle East peace, security, and stability of the world economy, the stability of oil prices and market, confronting forces of radicalism and terrorism, regionally and internationally. On many occasions, during those long years, Saudi Arabia paid a high price for its image in the Arab world by cooperating with American policies. We bore that cost because we believed in the value of our friendship with you.

Today, however, the world is changing and transforming. The pillars that held up our strategic relationship are challenged. But the importance of Saudi Arabia has not changed. The Kingdom is the center of the Islamic world, towards which 1.5 billion worshippers turn to pray, five times a day. Regionally and internationally, the Kingdom plays a strategically important role to achieve peace and prosperity by working with the US and other allies to end conflicts, all over the Middle East. The Kingdom provides more than 4% per capita in aid to developing and poor countries. Only yesterday, the Kingdom forgave 6 billion dollars in debt to those countries. We are an asset to our friends, not a burden. And while reforming and transforming, our fight against the forces of darkness continues. We also stand up to the hegemonic ambitions of the Iranian leadership, which, as we are witnessing in Denmark’s actions, never ceases to export its terrorist activities. We still value our strategic partnership with the United States and hope to sustain it. I hope that the US continues to reciprocate in kind.

The word “values”, has been bandied about frequently during this time, by our detractors, to try to distance us from each other. One value we hold and cherish is attributed to the Prophet Jesus, peace upon him, which is people who live in glass houses should not cast stones. Countries that have tortured and incarcerated innocent people and launched a war that killed thousands of innocent people based on fabricated intelligence should be humble in their regard for others. And countries that have persecuted journalists and disappeared a number of them should not pose as defenders of free speech. Another value we uphold and act upon is that the killing of an innocent person is like the killing of all of humanity. This is stated in the Quran. The killing of Jamal Khashoggi is like killing all of humanity. Innocent unarmed Palestinian children are slaughtered every day by the Israeli army.  Ms. Hassan referred to previous Israeli army slaughter of innocent Palestinians without recourse to justice. And yet, I do not see the same media frenzy, the demand to bring the perpetrators and whoever ordered them to kill those children to justice. So, where do we go from here? My hope is that we will remain friends and seek to strengthen our relationship, not break it.

Innocence is equally the quality of the eleven Jewish worshipers who were massacred in their house of worship in Pittsburgh. Humanity has been killed many times over by their murder. Let us pause for a moment of silence in wishing all the innocent victims God’s mercy.