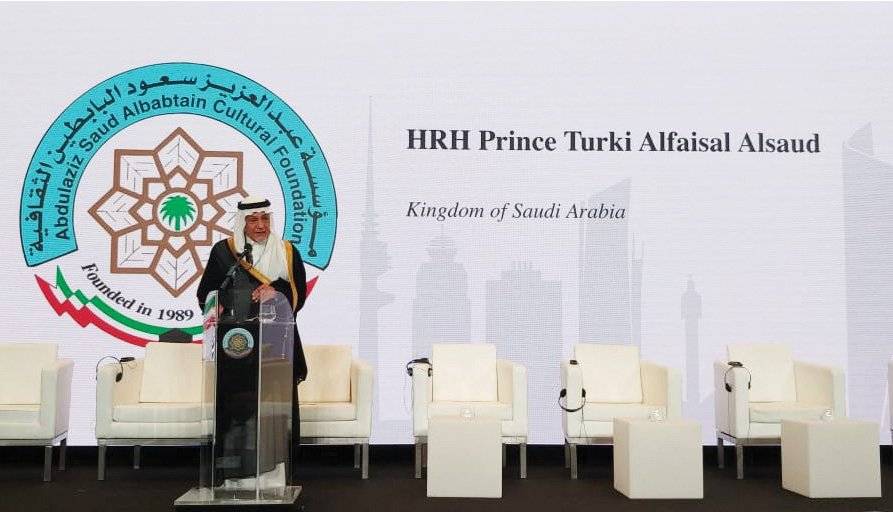 Prince Turki Al-Faisal, Chairman of the King Faisal Center for Research and Islamic Studies, believes that culture and religion are key elements in conflicts between different communities and races, they are tools for conflict resolution. He stressed the role played by cultural heritage in a dialogue among civilizations, concentrating on the importance of protecting and preserving cultural heritage. Human civilizations for over four thousand years have been obligated to the same things: The love of art, the appreciation of natural and human beauty, the desire to think and think in the universe and the world around us, the desire to learn, education, and the desire to build a great effect for growth and expansion prospects.

Al Faisal spoke in the World Forum for the Culture of Peace organized by the Abdul Aziz Al Babtain Cultural Foundation recently at the Peace Palace at the International Court of Justice in The Hague, the Netherlands, in the presence of political, academic and cultural figures from around the world and the participation of a number of representatives from a number of countries.: "Teaching a Culture of Peace" and "Protecting the World Cultural Heritage".

Al-Faisal said in his speech: "We witnessed the deterioration of the Iraqi, Syrian, Libyan and Yemeni cultural heritage, both material and intangible, by artillery shelling, bullets, looting, corruption, deception and theft. In the absence of international agreements to protect the heritage from these crimes, these conflicts clearly generate strong emotions for heritage, such as greed or destruction. "

His Highness outlined the four basic elements binding on all States during armed conflict: the obligation of parties to a conflict to respect cultural property, the prohibition use of cultural property of great importance for purposes likely to cause damage, and the prohibition of any appropriation, destruction or intentional destruction of designated institutions For religious, charitable, educational, artistic and scientific purposes, as well as for the prohibition of any form of theft, looting or misappropriation, and to prohibit any acts of sabotage of property of cultural significance to any community, in addition to the authority's commitment in preventing the illegal export of cultural property from the occupied territories and re-exported property illegal ways to the competent authorities in the occupied territories.

The Chairman of the King Faisal Center for Research and Islamic Studies, entitled in his speech "Education and protection of cultural heritage," pointed out that our Islamic heritage contains, for a thousand and four hundred years, the principles of benignant fights, including: no betrayal , treachery or representation of bodies , or the destruction of worship places, indicating that peace, social harmony, social and political coexistence, mutual respect and tolerance are the best remedy to tensions and burden emotions that often lead to armed conflict and civil war. which damage human life and cultural heritage.

Prince Turki Al-Faisal explained that dealing with emergencies requires understanding the role of cultural heritage and its uses in conflict, how to protect and preserve sites and acquisitions, communication strategies, logistics and planning. He called for further studies and the establishment of international groups that plan ways to protect and preserve cultural heritage in times of disaster. And suggested the development of peace-based strategies to prevent problems and conflict, reduce the dangers of war, train specialists in preservation of cultural heritage in times of crisis or conflicts, and develop contingency plans.

"Our focus should be on countries such as Iraq, Syria, Libya and Yemen. They have Jewish, Christian and Islamic heritage sites, museums and libraries, heritage preservation legacy, religious sites, worship places, archaeological sites and historical landmarks. The main challenge we are facing as peace advocates, promoters of heritage and admirers of great civilizations is how to protect and preserve cultural heritage in our countries and regions.